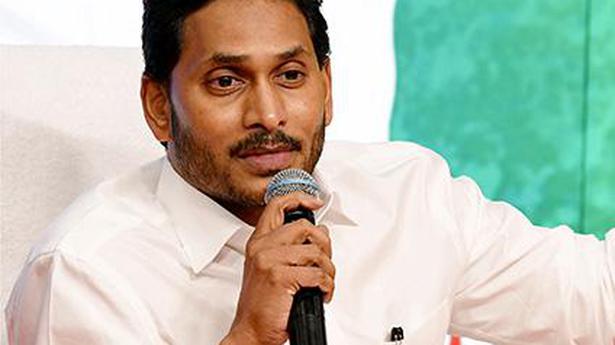 Making a powerful pitch for continuation of the mass contact programme, “Gadapa Gadapaki Prabhutvam”, Chief Minister Y.S Jagan Mohan Reddy minced no phrases in saying that the YSR Congress Party ought to brace itself for an intense combat in opposition to a mixed Opposition within the subsequent elections.

Addressing a workshop attended by Ministers, occasion in-charges and regional coordinators at his Camp Office at Tadepalli on Wednesday, Mr. Jagan stated that Opposition events had nothing to supply to the individuals as they’d performed nothing once they have been in energy.

“Let me make it clear that the ‘Gadapa Gadapaki Prabhutvam’, will be continued for the next eight months, and there will be a continuous review on the programme. There will be discussions on the programme and feedback will be taken. I have information that some MLAs are not taking this programme seriously and I want them to pull up their socks and take part in the programme with enthusiasm in future. The MLAs will be graded on the basis of this programme, and those who have not matched their performance with the expectations, will be shown the door,” Mr. Jagan stated.

While asking the MLAs to deal with grievances acquired in the course of the programme, the YSRCP president stated that the federal government had already arrange a efficient grievance mechanism.

“We have won 151 seats in the year 2019 and I don’t have any reason why we should not win 175 seats in the next elections. We should set a target of winning all Assembly seats, and I am sure we can do that. We have implemented almost all the promises and prepared a letter explaining the welfare schemes we have been implementing. Our schemes have benefited people across parties, caste and religion. We have created history and are now able to face people with confidence,” stated Mr. Jagan.

Stating that his authorities was capable of introduce a number of path breaking reforms in governance, the Chief Minister stated decentralised administration with village as a unit was taken up.

“Earlier, not even 10 people could work in a village, but now we have brought administration to the doorstep of people by setting up village secretariats, Rythu Bharosa Kendras, Village Clinics. Now, the time has come to go back to the people with confidence and take their support to win again. People will support us as they have been benefited by our governance. Has anyone imagined that we will win in Kuppam? Has any one imagined that we will sweep MPTC/ZPTC elections? I am certain that we can win 175 seats this time,” stated Mr. Jagan.

“Our welfare schemes have reached 87% and I want the MLAs to go to people directly, visit at least 10 ward/village secretariats in a month and explain to people the good things we have done — transformation of schools and hospitals under Nadu-Nedu. Even those who have missed out on welfare schemes are being covered in July and September,” Mr. Jagan stated.