Most street works to overlook deadline forward of monsoon 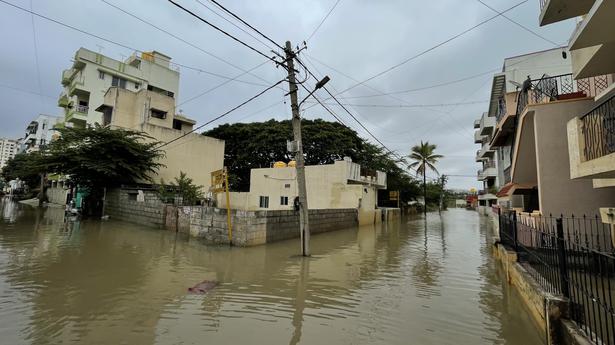 If the havoc attributable to the latest high-intensity pre-monsoon showers are a sign of how the town’s infrastructure would stand towards the monsoon rains, Bengalureans are bracing for the more severe.

The civic physique is engaged on issuing new tenders to desilt storm-water drains (SWDs) and do intensive roadworks solely now, even because the monsoon is anticipated to set in early this yr.

Chief Civic Commissioner Tushar Giri Nath stated that through the latest metropolis rounds, Chief Minister Basavaraj Bommai, who additionally holds cost of the town, noticed that many of the desilting of drains have been occurring within the lined drains and never within the non-lined drains, which has brought on numerous flooding as a consequence of heavy silting and backflow.

“The Chief Minister instructed us to immediately take up desilting of these non-lined drains. We have called for a short-term tender, which will be finalised in a week, and the work completed over the next one month. We have divided the work into several packages, and will start them simultaneously to ensure that the works are on track. In the ongoing works in the lined drains, we will speed up the work,” he stated.

But the timing of the work has drawn the ire of civic activists. “What we don’t understand is as to why the civic body doesn’t learn from the previous monsoons and start preparing early? It is such a joke that the civic body is tendering desilting SWDs now, days ahead of the monsoon,” stated D. S. Rajashekhar of Bengaluru Praja Vedike.

The latest rains additionally introduced extra distress to the town’s roads. The civic physique just lately mapped 10,282 potholes utilizing the FixMyStreet app and have begun work on filling them. “We are already in the process of tackling 5,500 potholes, and we are confident of filling all the identified potholes in the next 10 days,” stated Mr. Giri Nath. “We are working on a war footing to fill all the potholes in the city, using all modes and resources available, including Python,” he added.

A view of the street close to Baiyappanahalli that developed an enormous cavity just lately.
| Photo Credit: SUDHAKARA JAIN

Meanwhile, Bengaluru City Traffic Police have listed 59 spots throughout the town that frequently see waterlogging. “We asked the traffic police on the ground to geotag all locations that see flooding and cause traffic issues, based on which we have submitted the list to BBMP,” stated Joint Commissioner of Police (Traffic) B.R. Ravikanthe Gowda.

B.S. Prahlad, Chief Engineer, Road Infrastructure, stated the civic physique had referred to as tenders and Friday was the final day to submit bids to put in vertical field sections at these factors for the water to empty out of the roads. The work shall be accomplished quickly, he stated.

The Bruhat Bengaluru Mahanagara Palike can be redoing the roads in 110 villages — 794.98 km dug as much as lay utilities like underground drainage and water pipelines. “At a recent review meeting, the previous commissioner set a May-end deadline for the work. However, due to heavy rains, work has been going on at a very slow pace and it is unlikely that the works will be completed before the monsoon,” a senior civic official conceded, signalling that the 110 villages are going to spend this monsoon too with unhealthy roads and ongoing civic works.

The BBMP has introduced that it’s going to take up re-asphalting of 392 km of roads throughout 208 roads which can be in a foul situation at a price of ₹600 crore. This work has not even begun on the bottom but, which additionally means commuters will most likely must put up with unhealthy roads this monsoon too.