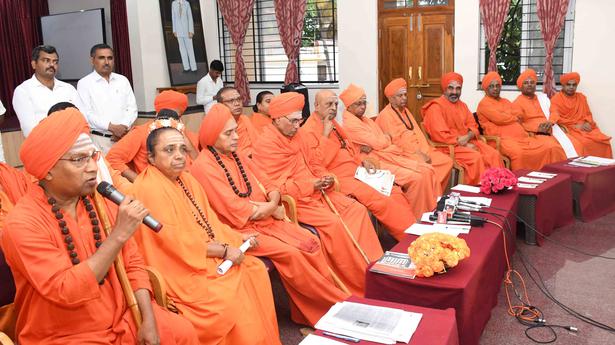 Several distinguished Lingayat seers met in Dharwad on Tuesday to debate what they termed “distortion” of historical past of nice personalities and set a 10-day deadline to the State authorities to rectify the errors.

Addressing a press convention after the assembly in Dharwad, Sri Panditaradhya Shivacharya Swami of Sanehalli Taralabalu Mutt stated that the textbook revision committee had completed the job of imposing ‘vedic religion’ on kids by distorting historic info about Basavanna within the Social Science textbook of Class 9. “Basavanna rejected the vedic tradition and ‘janivara’ (sacred thread) and founded Lingayat religion by giving the concept of ‘Arive Guru’ (realisation is teacher). However, the committee has disreputed him by distorting facts,” he stated.

“Basavanna opposed sexual inequalities, superstitions, homa and other rituals and stood for embracing all. But unwanted, unrelated unwanted things have been said about him. This apart, false information has been given on Kuvempu, Dr. Ambedkar and other great leaders. We will revise the lesson on Basavanna and submit it to the government. Either it can accept it or rectify it on its own. If no action is taken within 10 days, we will meet again to chalk out the next course of agitation”, he stated.

Inflation accelerates to 7.41%, highest since April