Earthmover severs the pinnacle of a employee buried alive in trench 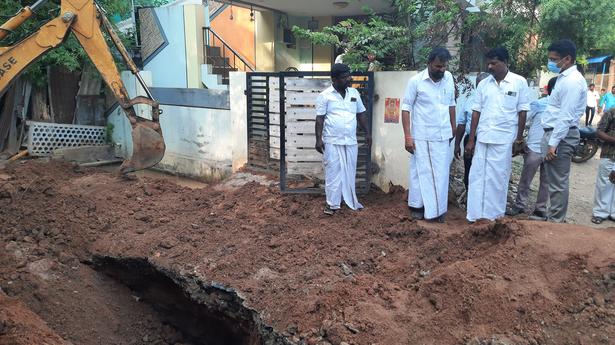 A employee, R. Satish, 34, of Erode, was killed when an earthmover severed his head in an try and rescue him after he was buried alive in a 13-foot-deep trench right here on Friday. The unfastened soil caved in when he was concerned within the laying of the underground drainage pipeline at Ramamurthy Nagar.

The employee, employed by a contractor, was standing within the trench dug as much as lay the pipeline on B.T. Ranadive Main Road. The locals stated the work had been happening for a yr now.

C. Pragalanathan, 52, a resident, stated the earthmover operator who hurriedly tried to scoop out the soil to save lots of Satish inadvertently chopped off his head.

“In the first attempt, the operator removed a good chunk of soil and he did not expect the worker’s head to be at the top, and it got chopped,” he stated. Immediately, the employees fled from the scene fearing public wrath. “Had the workers sought the help of locals in manually removing the soil, there would have been a chance to rescue him alive,” he stated.

“Loose soil caved in and buried him alive,” stated Corporation Commissioner Simranjeet Singh Kahlon, who rushed to the location together with Deputy Mayor T. Nagarajan.

Though the Corporation Engineer was not current on the website on the time of accident, one website engineer of the contractor was accessible, he stated. Action can be taken towards the erring officers after an investigation.

Fire and Rescue Services personnel recovered the physique from the ditch.

This is the second deadly accident involving staff, employed for the Madurai Corporation, inside 45 days. On April 21, three staff have been asphyxiated once they have been working to repair an electrical motor in a sewage assortment effectively at Nehru Nagar.

The finest and worst performing UK portfolios since Brexit

Rupee has held up very effectively towards U.S. greenback in comparison with different currencies: Finance Minister