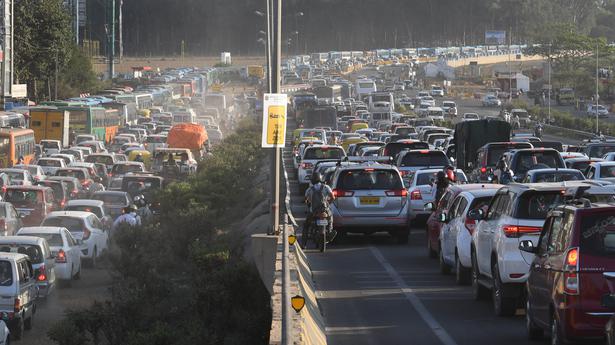 The National Highways Authority of India (NHAI) will construct service roads close to the Yelahanka Airforce Base, which can assist in the graceful circulate of the visitors on the freeway that results in the Kempegowda International Airport (KIA). The freeway doesn’t have service roads from the tip of BSF headquarters to Hunasamaranahalli Lake.

Mid-May, the airport street witnessed inundation attributable to incessant rains as a portion of the low-lying space of the freeway close to the airbase was flooded with rain water, leading to a visitors pile-up for miles. Unable to achieve the airport on time, many had missed flights.

Flyers had slammed the NHAI for failing to clear the waterlogging on one of many outstanding highways for which a hefty toll charge is being collected from street customers.

Chief General Manager of National Highways Authority of India (NHAI) M.Ok. Wathore informed The Hindu {that a} service street on the stretch for a distance of two km can be constructed within the coming days and Defence authorities can be approached searching for the required land for the development of the service street.

When requested in regards to the motive for waterlogging within the space, the official stated, “Waterlogging happened due to heavy rainfall. The drainage system is clogged because of plastic and other waste. We have given instructions to the officials to attend to these issues and help to ensure the smooth flow of the traffic”.

On different hand, Bangalore Metro Rail Corporation Limited (BMRCL) is establishing an elevated metro line alongside the freeway from Hebbal to the airport. Near the airbase, BMRCL is constructing the metro line utilizing a cut-and-cover technique. The BMRCL will take away a number of constructions coming in the best way of the alignment.

An official of BMRCL stated, “We have to remove five buildings and several utility structures coming in the way of our alignment and also to facilitate construction of a service road on the right side of the highway. BMRCL will build the structures, the overhead tank, the subway, and others as compensatory measures as per the requirement of IAF. The NHAI will build the service road on both sides”.

DCP visitors (North) Savitha S. added, “We had given strict instructions to officials concerned on clearing the water drainage system. Water logging caused hardship to the public as traffic piled up for hours”.

No progress in including extra lanes close to Hebbal

The NHAI had deliberate so as to add extra lanes from the Hebbal flyover in direction of the skywalk situated close to Esteem Mall. Many years in the past, timber that had been situated on Defence land had been axed to construct extra lanes. But the undertaking was by no means accomplished.

The Hebbal flyover is thought for visitors snarls as hundreds of automobiles are available in varied instructions. Building extra lanes close to the skywalk would assist in easy circulate of the visitors shifting in direction of Sahakarnagar.

The bus station at Hebbal is utilized by tons of of passengers utilizing inter-State companies day-after-day and metropolis buses operated by the BMTC. In the night hours, buses and different automobiles are haphazardly parked, blocking the motion of visitors.

On different hand, close to the Sadahalli toll gate, the NHAI had deliberate to construct an underpass and take away the prevailing visitors sign. Flaws within the design compelled the authority to desert the undertaking mid-way. Removal of the sign on the level would make the freeway a signal-free hall until KIA.