25 pilgrims killed as bus falls into gorge in Uttarakhand 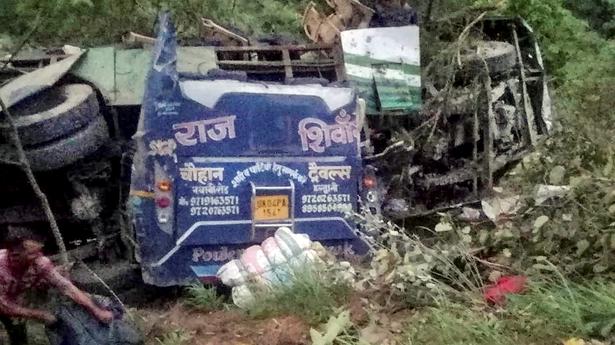 M.P. residents had been on the best way to Yamunotri temple

M.P. residents had been on the best way to Yamunotri temple

Twenty-five pilgrims from Madhya Pradesh died and three had been critically injured on Sunday night when the bus by which they had been travelling fell right into a deep gorge en path to the Yamunotri temple in Uttarkashi district.

The accident befell close to Rikhavu khadd on the best way to the Himalayan shrine round two kilometres from Damta on NH-94, Uttarkashi District Disaster Management Officer Devendra Patwal mentioned.

The pilgrims had been from Panna district in Madhya Pradesh, Additional Chief Secretary Radha Raturi mentioned.

Besides the driving force and the helper, there have been 28 passengers on the bus.

Seventeen our bodies have been recovered up to now, and a search is on for the remaining, Patwal mentioned.

Three folks injured within the accident have been admitted to the Community Health Centre in Damta.

Police and SDRF groups have been rushed to the spot, apart from ambulances from Badkot, Nagaon and Nainbagh.

Chief Minister Pushkar Singh Dhami visited the catastrophe management room on the secretariat instantly after being knowledgeable concerning the accident. He requested the district Justice of the Peace of Uttarkashi to hurry up reduction and rescue operations.

“Officials concerned have been instructed to investigate the accident. May God grant the departed souls a place at his feet and strength to their family members to bear the pain. Also, I pray for the speedy recovery of all those injured,” Dhami mentioned in a tweet in Hindi.

Madhya Pradesh Chief Minister Shivraj Singh Chauhan additionally spoke to Mr. Dhami for an replace on the state of affairs.

“The news of the bus accident in Uttarakhand is very painful. I express my condolences to those who have lost their loved ones. Under the supervision of the state government, the local administration is engaged in all possible assistance on the spot,” the Prime Minister’s Office mentioned, quoting Modi.

“The prime minister has announced an ex-gratia of ₹2 lakh each from the PMNRF for the next of kin of those who lost their lives in the accident in Uttarakhand. The injured would be given ₹50,000 each,” it added.

President Kovind expressed his condolences to the households of the deceased.

“I feel pained by the sad news of the death of people in a bus accident in Uttarakhand,” he mentioned in a tweet in Hindi.

“It is very sad to hear about the bus of devotees falling into a gorge in Uttarakhand. I have spoken to Chief Minister @pushkardhami on this. Local administration and SDRF teams are engaged in rescue work and the injured are being taken to a nearby hospital for treatment. NDRF is also reaching there soon,” Mr. Shah mentioned in a tweet in Hindi.

The Himalayan shrines of Yamunotri, Badrinath, Kedarnath and Gangotri are generally often known as Char Dham.